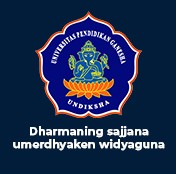 Singaraja- Students from Universitas Pendidikan Ganesha (Undiksha) once again present a champion. This time from the Bali, Solo Pop Competition Event which was organized by Universitas Warmadewa, Denpasar on June 26, 2022.

Three Undiksha representatives managed to earn an award. Among them was first place in the Solo Pop Male category, which was won by Komang Dandi Yudha from the Law Study Programme. He performed Judika’s song entitled How If I’m Not Fine, which managed to amaze the jury. He said the song was chosen because it has a high tone and difficulty level. “I want to give a surprise to the jury as one of the achievements in the competition,” he said Monday (6/27/2022).

This student from Singaraja admitted that he was interested in participating in the competition because he wanted to hone his singing skills and also seek experience. This is the first time he has participated in the event amongst the whole of Bali. Previously, he had won at the Regency and Undiksha levels.

In addition to the Male Pop Solo category, Undiksha also won 1st place in the Female Solo Pop category presented by Ni Komang Ary Dharma Pertiwi from the Family Welfare Education Study Programme. The student, familiarly known as Ary, performed a song by the singer of Yura Yunite entitled Must Be Happy. The song was chosen because it was in accordance with her vocal character. “The song is easy listening, so I hope that with the song, I could bring the audience will enjoy listening to it,” she explained. This is not the first time she participated in the Bali Pop Radio Star event and became the 1st Runner-up.

On the other hand, Olga Cristiana from the English Education Study Programme also showed off in the female pop solo category and won 3rd place with Mahalini’s song Sisa Rasa. Similar to Ary, this student from Gerokgak Village, Buleleng Regency, has also often participated in this kind of event. Finally, in 2021, she managed to become the favorite champion in an event organized by one of the local Bali TV stations. The success of this Undiksha student certainly cannot be separated from the preparation for 2 weeks under the guidance of the Advisor Dr. Kadek Wirahyuni, S. Pd., M. Pd.

Vice-Rector for Student Affairs, Public Relations, and Undiksha Alumni Prof. Dr. I Wayan Suastra, M. Pd., expressed his appreciation for this achievement. He invites students to continue to hone their skills and then be able to take part in national and international competitions. (lpsy)